We are sharing the letter the Childers Group sent to Dr Andrew Leigh MP on 29 June 2016. The letter is in response to comments by Dr Leigh in a recent radio interview. 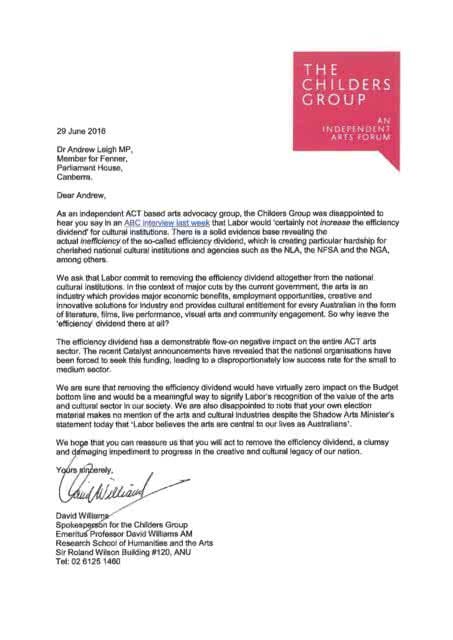 The Childers Group has put together an analysis of the past 12 years of arts grants in the ACT and the trends within different funding types. This analysis shows that over this time, stretching over three full electoral cycles, there has been a significant decline in ACT arts grants on a per capita basis, and as a proportion of funds available to Government.

This analysis is drawn from over 1,500 grant entries in ACT Government annual reports, copied and sorted by grant type.

END_OF_DOCUMENT_TOKEN_TO_BE_REPLACED

Following the success of ArtsPeak’s election debate in Melbourne last week, the Childers Group invite you to be involved in a new lobbying strategy in the lead up to the federal election – an Arts Day of Action on 17th June 2016.

Here’s how you can be involved on 17 June:

We are sharing a copy of a letter sent to our PM by the Australian multi-arts peak body, ArtsPeak. The letter expresses their consolidated view of the status of Federal Government support for arts and culture in Australia, and suggests some ways forward in relation to recent changes in policy direction. A good read.

Over the past few days there has been much discussion around whether unpaid mentorship models are appropriate in the context of content production for a major ACT event drawcard:

The Dark Side of Enlighten – Canberra Times

Enlighten artists unpaid but ecstatic about mentorship opportunity – The RiotACT

This has been a complex issue that has led to much discussion and debate, because it’s important. I’d like to try my best to articulate what I hope is a consensus position amongst the Childers Group.

I think the Childers Group’s role in this as impartial advocates – as much as we, a bunch of individuals, can be – is to consider whether there is legitimate room for improvement in how artists are engaged in the ACT. If there is, then let’s take this opportunity to drive some positive change, regardless of how we got here.

Firstly, I want to make it clear that it is the sincere belief of the Childers Group that all those involved in the discussion, heated though it may be at times, are acting in good faith with the best interests of the sector at heart.

It is absolutely vital that arts practitioners speak up for the value of the work that they do. We are important economic drivers for the territory and good art deserves to be paid art. It is a testament to the articulate, passionate and organised arts community that this issue has been brought so prominently into the public domain.

Likewise, artsACT have been consistent in communicating that the number of artists professionally engaged and amounts paid to them are key performance indicators for the health of the ACT arts sector, and a range of non-financial development opportunities such as mentorships are critical in advancing sustainable professional careers.

But while we have the measures, we are lacking a clear set of up-front principles to guide engagement with artists, particularly where there is a differential in the negotiating power between parties.

As a major employer of artists in the ACT, it is reasonable for the community to have expectations that the ACT government (and their contractors) has fair dealings with them.

These issues are not new and the question of whether unpaid internships, even willingly entered, are opportunities or exploitative exists outside the arts sector. While it would be inaccurate to describe the mentorships as voluntary work, the nation-leading team of downright legends at Volunteering ACT has produced an excellent guide for organisations with a simple checklist to determine whether a position or opportunity should be paid.

Questions in their guide include:

To this we could add:

We can say that the arts are different – if unpaid actors in a community production don’t show up the whole show falls over, for instance. But taken as a whole, if there are lots of “Yes” answers, I think a set of considerations like this could help to avoid situations in future where practice falls short of community expectation. I would love to see a resource like this available and used by the ACT Government, its contractors, and others considering engaging artists in the ACT.

In my sole opinion, part of the issue that we have seen this year is that Enlighten is a victim of its own success – it has grown very rapidly, and in the past couple of years been paired with an explosively popular commercial project in the form of the noodle markets. Given the shift in the economics of the event as a whole, it is reasonable to reconsider whether unpaid roles for projection artists, who are a primary attractor for the customers of these markets, remain appropriate. The question should at least be asked, there’s a problem if it’s not.

It’s worth saying also that it would be a real shame if artists in the ACT were denied opportunities to benefit from mentorships and national expertise in future contracts because it became all too difficult. We need to bring these skills in. Hopefully, this discussion will lead to the sector becoming more sustainable, not less.

What we would like to see is an active and continuing assessment of the nature of contracting artists to present at ACT events, and for the ACT Government as a major arts employer to find assurance that best practices are being followed.

Keep making good stuff, folks, and keep talking to each other. Galvanize.

… in case you missed the Childers Group’s pre-Budget arts forum!

We’ve had some very positive feedback about our pre-Budget arts forum on Wednesday 24 February, with calls for a follow-up pre-election forum later in the year. As one participant put it: ‘It was a terrific night, one of the Childers Group’s best’.

With expert facilitation by ABC 666 presenter Genevieve Jacobs, we invited three key MLAs to give the packed audience their vision for the arts in an ACT Budget context, i.e. show us your Budget policies and let’s discuss them. Dr Chris Bourke (Labor), Shane Rattenbury (Greens) and Brendan Smyth (Liberal) all presented their ideas for a vibrant, culturally diverse and progressive city with genuine interest and passion.

Their ideas were stimulating and in some cases unexpectedly imaginative, although this wasn’t an audience that needed to be convinced of the value of the arts, a point not lost on the facilitator, who skillfully steered the conversation to more clarity.

None of the MLAs committed to increasing the Arts fund, leaving some in the audience wondering about the true state of the ACT Budget. And questions remain, such as – how can the arts be grown, not only by increased funding but by changing legislation? How can we seek and develop commercial opportunities? How can we use existing resources better, and harness local expertise? How do we increase awareness of arts/cultural benefits across portfolios for the benefit of all (artists & community alike)? Several MLAs also mentioned music as ‘arts education’, although there are five arts subjects in the new Australian Curriculum: The Arts.

We’ll keep asking these and other questions in the coming months.

We hear this was the first political forum in this ACT election year, showing the arts sector can be an organised and powerful force. As an ideas and vision forum, a particularly important outcome was the networking, with more people connected and doors opened to MLAs’ offices (and ears!) – all ongoing aims of the Childers Group.

Finally, here are a few ideas we’ll be pursuing:

Supporting the arts is not a luxury, it’s essential to a modern city like Canberra.

The main way the ACT Government supports the arts is through the ACT Arts Fund. The last time the Arts Fund received a significant boost was in 2005. It’s time for a top-up, don’t you think?

The arts are key to an innovative and adaptive society and economy – creative jobs are the future.

Canberra’s tourism and developing image as the ‘cool little Capital’ can only exist with strong policies and investment in the arts.

How do you put a value on art, and the people creating it? Toni Hassan, The Canberra Times, 10 March 2016

We are closely following the impact on our Canberra-based national institutions by the efficiency dividend. Read the letter that has been sent to our Prime Minister as of today. Add your voice to the conversation.   Letter from CG to PM

Tickets are selling fast for this important discussion with our ACT arts colleagues and political representatives. For more info – take a look at our media release.

This year the ACT community will be voting for who will form government for the next 4 years. How can we make sure that those standing for election value the arts and have meaningful arts policies? The Childers Group does this by getting the three main political parties in one room, asking for visions and policies to be put forward, and calling for questions from the floor. We did exactly that in 2012 and we were thrilled with the interest from the community and the engagement of the political parties. So we’re doing it again – this year with a special panel to lead the questions.

BOOKINGS ESSENTIAL. UPDATE: the forum is SOLD OUT!

We look forward to seeing you! 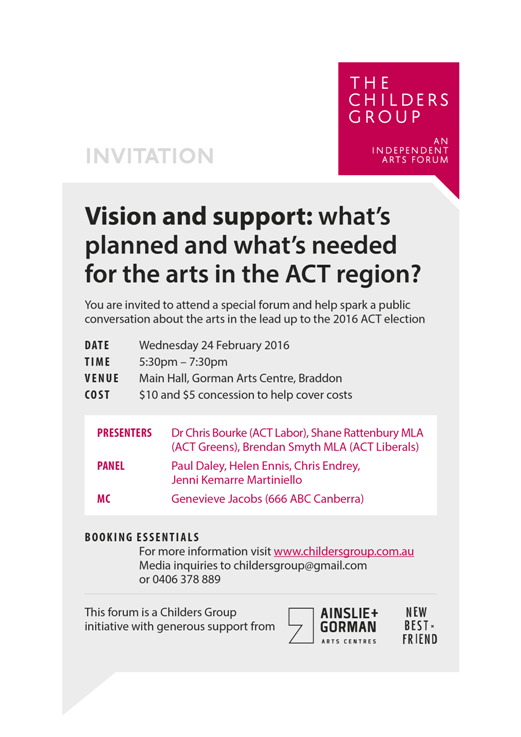 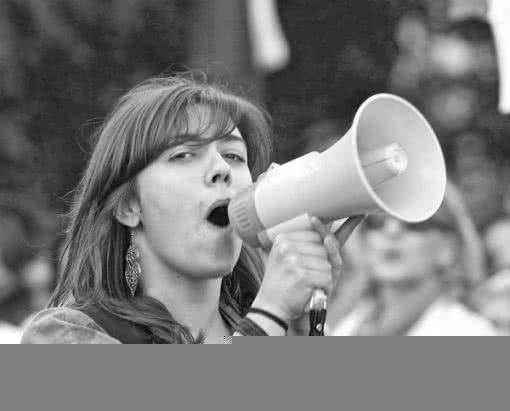 Happy New Year. This one’s going to be big.

There’s the ACT election, where the Assembly will be increasing from 17 to 25 members, and a party who’s been governing for many years will be up against one that’s chomping at the bit. Will the main political parties prepare arts policies? If so, how informed will those policies be and what impact would they have on the ACT region? And what about the minor parties and the independents? Some very interesting election commentary from Jack Waterford, former editor of the Canberra Times, can be found here.

Then there’s the federal election, which might not directly affect the arts in our region, but with the recent changes to the funding of the Australia Council and the establishment of the centralised Catalyst funding program it will still be very, very fascinating indeed.

As always, the Childers Group will be working hard to be an articulate, informed and engaged voice for the arts in our region, and one of the key ways we do that is through holding forums.

Frankly, we want – and need – your involvement. 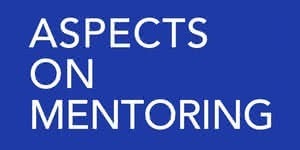 Our first forum for the year, Aspects on Mentoring, will be held from 5:30-7:30pm on Thursday 28 January at Canberra Museum and Gallery. Learn more about mentoring and hear from mentorees and their mentors about their experiences, in an open and frank discussion around finding the right person, and working out how to work best together. Then you’ll have a rapid-fire opportunity to meet potential mentoring partners, share your stories, and maybe kick off something special. This will also be an excellent time to meet other emerging and established leaders in the arts in the ACT, and build your networks over a glass of wine.

Admission is free, bookings are essential.

Then, on Wednesday 24 February at Gorman Arts Centre, we’ll be holding Vision and Support: What’s planned and what’s needed for the arts in the ACT region? Come and participate in this forum/debate and help spark a public conversation about the arts in the lead up to the 2016 ACT election! UPDATE: this forum is now SOLD OUT!

The details are as follows:

With much thanks to our venue partners, Canberra Museum and Gallery/Cultural Facilities Corporation and Ainslie + Gorman Arts Centres.

The Childers Group advocates for the arts in the ACT region.

For more information, to request an interview, to raise a matter of concern, or alert us to a potential opportunity, please contact the Group’s coordinator Michael White via childersgroup@gmail.com